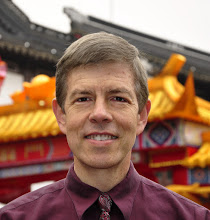 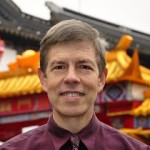 Jeff Lindsay lives in Shanghai but has roots in Utah and Wisconsin. His interests include China and Chinese (the language and the food), intellectual property, chemical engineering, magic (a hobby), reading, writing, travel, photography, and his LDS faith.

Jeff Lindsay has been defending the Church on the Internet since 1994, when he launched his LDSFAQ website under JeffLindsay.com. He has also long been blogging about LDS matters on the blog Mormanity (mormanity.blogspot.com). Jeff is a longtime resident of Appleton, Wisconsin, who recently moved to Shanghai, China, with his wife, Kendra. He works for an Asian corporation as head of intellectual property. Jeff and Kendra are the parents of 4 boys, 3 married and the the youngest on a mission.
He is a former innovation and IP consultant, a former professor, and former Corporate Patent Strategist and Senior Research Fellow for a multinational corporation.
Jeff Lindsay, Cheryl Perkins and Mukund Karanjikar are authors of the book Conquering Innovation Fatigue (John Wiley & Sons, 2009).
Jeff has a Ph.D. in Chemical Engineering from Brigham Young University and is a registered US patent agent. He has more than 100 granted US patents and is author of numerous publications. Jeff’s hobbies include photography, amateur magic, writing, and Mandarin Chinese.
http://mormanity.blogspot.com/
http://www.jefflindsay.com/
http://www.jefflindsay.com/LDSFAQ/
http://www.jefflindsay.com/BMEvidences.shtml