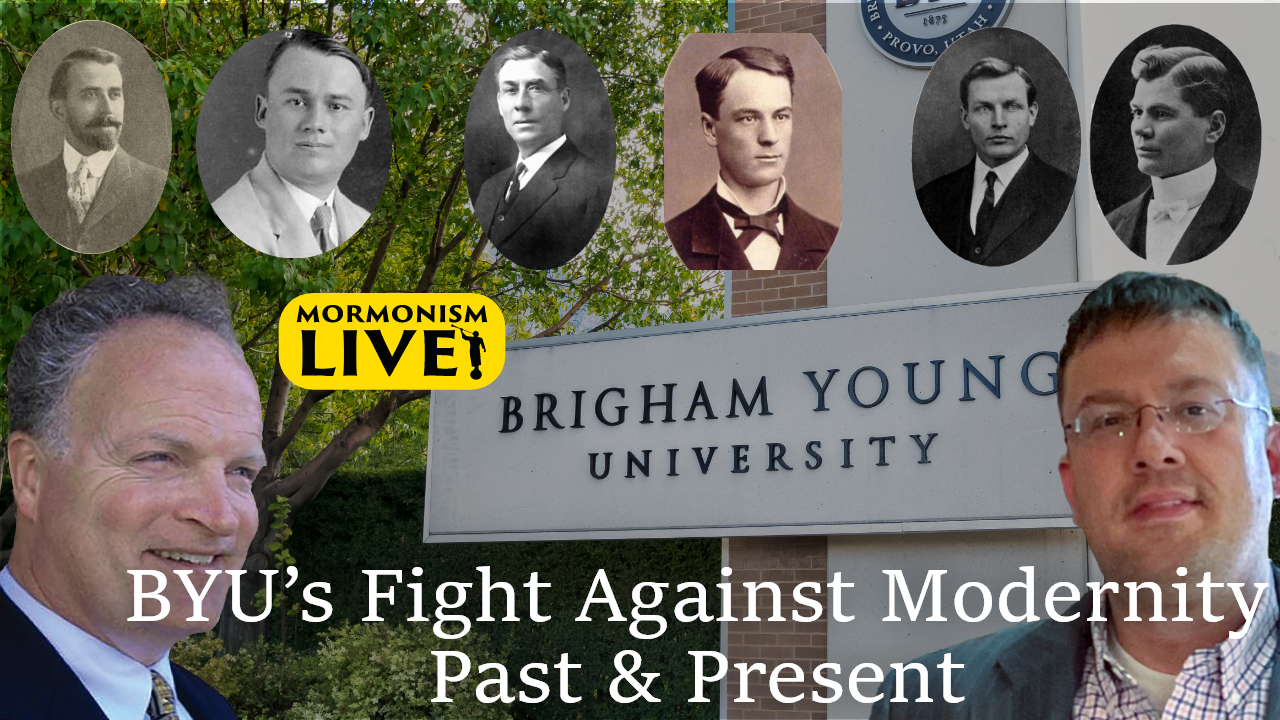 BYU has a history of manipulating & pressuring its educators into consistently stopping short of teaching modern best accepted ideas and research. While it claims to be a university that values education what it really does it limit the critical thinking skills and works to prevent its students from having access to the best information. We start by discussing the modern moment where BYU has changed its policy around the worthiness of BYU and CES Educators to control what is taught in the classroom and then we dive deep into the past to show the more things change the more they stay the same. And lastly we demonstrate that agency really is a value that The Church’s mouth writes but their actions just aren’t cashing.

A.) BYU’s (All of CES) New policy for its staff (Notice the Church speaks officially for BYU as it is one and the same)

The old Wording vs the new wording

The new policy is: “to hold and be worthy to hold a current temple recommend.”

Friend and One of the Mole Professors I have on the inside of BYU. (We’ll call him Elder Dyches for anonymity) “Elder Dyches” told me that “Under that condition, I could tell my bishop I qualify, but am not interested in having a recommend and it wouldn’t affect my employment.”

The permutations of such a change

Imagine Pressure to stay in line this adds.  Is it significant? Maybe not versus the old wording but it absolutely feels like additional undue influence.  BYU is simply looking for just cause AKA – breaking the “Worthiness Standard”.  Even if on a loophole that involves abusive underhanded methods intended to manipulate people into obedience and loyalty over conscience.

B.) Which led me to wanting to share with you The 1911 Brigham Young University modernity controversy

In 1907, then BYU president George H. Brimhall (No you silly gooses Elder Oaks wasn’t BYU president back then.  He’s not that old) began hiring a new group of faculty to increase the academic reputation of his school.  His goal “to include in [his] faculty … the best scholars of the church.” (Brimhall was 55 yr old)

These were devout Mormons but who were sought out intentionally to bring the Church’s College approach into Modernity including increasing the intellectual atmosphere of the university and community.This led to these four facilitating discussion and debates on evolution and the Bible, and attempting  to convey that evolutionary ideas and Mormon theology were not mutually exclusive, but rather complementary

These four professors were popular.

They liberal ideas are being met with disapproval

Horace H. Cummings, superintendent of the church schools (and largely self-educated) was deeply bothered by the non-approved curriculum being brought in.

It was decided that these men “were out of harmony with the brethren” and Horace H. Cummings offered the Petersons and Ralph Chamberlin a choice: alter their teachings or lose their jobs. Privately, Joseph B. Keeler told Ralph Chamberlin he could stay (His curriculum must have been pretty Vanilla), but he refused, as the Petersons weren’t given the same offer.

Brimhall – “There are some people who predict the death of the college if these men go. I am ready to say that if the life of the college depends upon any number of men out of harmony with the brethren who preside over the church, then it is time for the college to die.”

Ralph Chamberlin responded during the meeting between these four teachers and the School administration (which included 6 Church leaders) “If you can bring me one student whose faith I have injured in Mormonism, I will bring you five that you, through your narrowness, have driven out of the church. … I never gave a public lecture on evolution until I had consulted you as to whether it would be all right. You urged me to do it. Now, why have you changed suddenly?” Brimhall could only feebly joke, “Well, I’ll tell you, Brother Chamberlin, I know whi ch side my bread’s buttered on.”

Unwilling to change their teachings, the Petersons and Ralph Chamberlin left the university in 1911, while William remained for another 5 years, resigning in 1916.

The University of Utah in Salt Lake City had a similar controversy — what some at the time described as ‘a tempest in a teapot’ — erupted four years later in February 1915. There, the dismissals of two professors and two instructors by President Joseph T. Kingsbury — and the subsequent resignations of 14 faculty members in protest — launched the American Association of University Professors’ first institutional academic freedom inquest, spearheaded by AAUP founders Arthur O. Lovejoy and John Dewey. The 1911 BYU controversy — involving some of the same professors, including the Peterson brothers and the Chamberlins — led in part to the University of Utah debacle

Conclusion: The Salt Lake Tribunes many as 80 percent of the faculty sympathized with the Petersons and Chamberlin. When Joseph F. Smith was told that “a number of [Provo] merchants and others favoring the … teachers had withdrawn their patronage from the [White and Blue],” he “spoke up immediately and said that the First Presidency wanted no change in the paper’s policy and … [said] he would instruct [Zion’s Savings Bank] to keep the paper out of financial difficulties.” Smith also admonished his son, Andrew, a student at the high school adjoining BYU: “For my sake, my son, as well as your own[,] eschew the Petersons’ and Chamberlin’s evolution and all such things.” On 13 March over 100 undergraduates assembled on campus in a mass rally to “stand by their teachers.” The students distributed a petition “ratifying and endorsing the teaching of the professors, and praying for their retention by the Board of Trustees.” Of a total college enrollment of 114 undergraduates, as well as a handful of professors, over 90 students and faculty signed the statement, which both the Tribune and the Herald-Republican printed. Predictably, the Deseret News chastised the students for airing their criticisms in print, especially in the Tribune, while Brimhall publicly scolded them for “dictating” to the “prophets.”

Brimhall discussing the issue with Reed Smoot – Throughout the following weeks, Brimhall was left to deal as best he could with dissatisfied faculty and students. In mid-May, he wrote again to Smoot, “I would be in perfect misery if I were not in harmony with those over me—I can stand it to be out of harmony with others. My policy has been to follow the interests of our faculty and also follow the interests of the student body, [but] I cannot be expected to follow either of the latter unless they are in perfect harmony with those above me.” Smoot replied supportively, “If the time ever comes that it is impossible for me to be in harmony with my presiding officer, I will quickly resign, if it involves any great principle affecting my conscience or my religious beliefs.”

Joseph Keeler (a counselor to Brimhall in the BYU presidency) later asked, “Brother Chamberlin, why can’t you teach this subject the way we want it taught, [instead of] the way you’re teaching it?” Chamberlin replied, “I’m so constituted that I can’t teach what I don’t believe.”

Following the controversy, many faculty and students were reluctant to discuss some “matters of scientific and sociological value [p.36]for fear of losing their positions and receiving the boycott of the church.” Others began asking if there were “any [other] doctrines of the church which [were] inconsistent with the commonly accepted conclusions of science.” School trustees approved a new teaching contract in October 1911 which required loyalty to church authorities as a condition of employment.

Back to current moment
The Voluntary adoption of the new policy

“https://catalog.byu.edu/about-byu/administration –  Who is at the head of BYU (They are one and the SAME

In 1911, a professor was fired from BYU for teaching evolution. 80% of student body signed a petition in the Salt Lake Tribune to save him. Today, BYU exhibit describes firing of highly qualified teacher as "righteous sacrifice." from exmormon