Mormonism LIVE: 099: The 1826 Trial of Joseph Smith The Glass Looker

On this week’s episode we take a deeper look at the 1826 trial in Bainbridge, NY. We examine what led to the trial, what witnesses claimed, what we know about the trial proceedings, how Smith and Stowell got introduced to each other, and a few other interesting facts along the way that make this such an interesting episode in Church history.

This outline was used in preparation for Mormonism LIVE: 099 : The 1826 Trial of Joseph Smith, The Glass Looker – https://youtu.be/A2JxyoOtNlM

On this week’s episode we take a deeper look at the 1826 trial in Bainbridge, NY. We examine what led to the trial, what witnesses claimed, what we know about the trial proceedings, how Smith and Stowell got introduced to each other, and a few other interesting facts along the way that make this such an interesting episode in Church history. 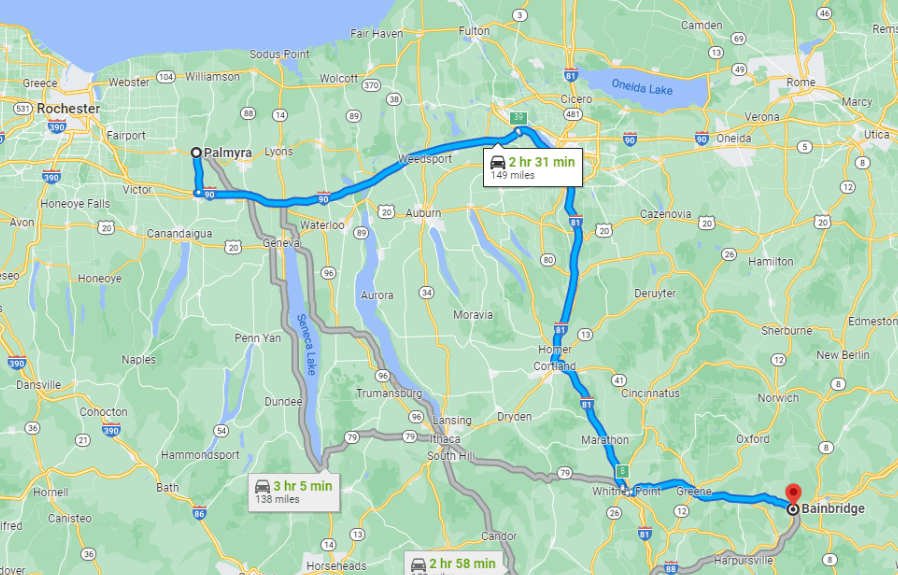 A.) SET THE STAGE 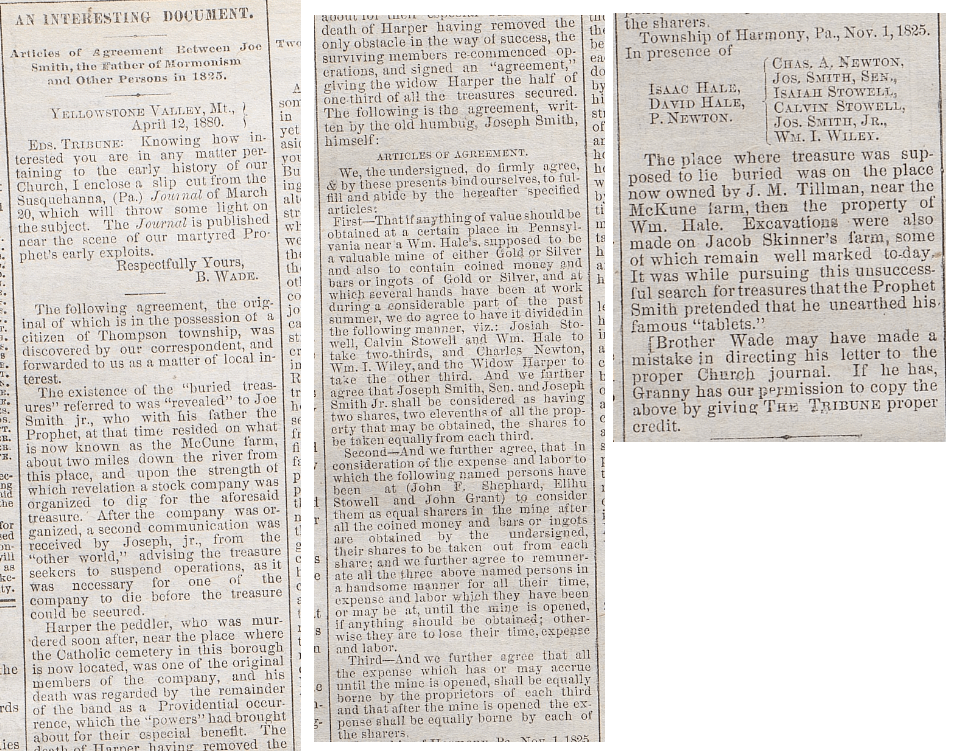 B.) Where does the author in Fraser’s Magazine locate this trial record? 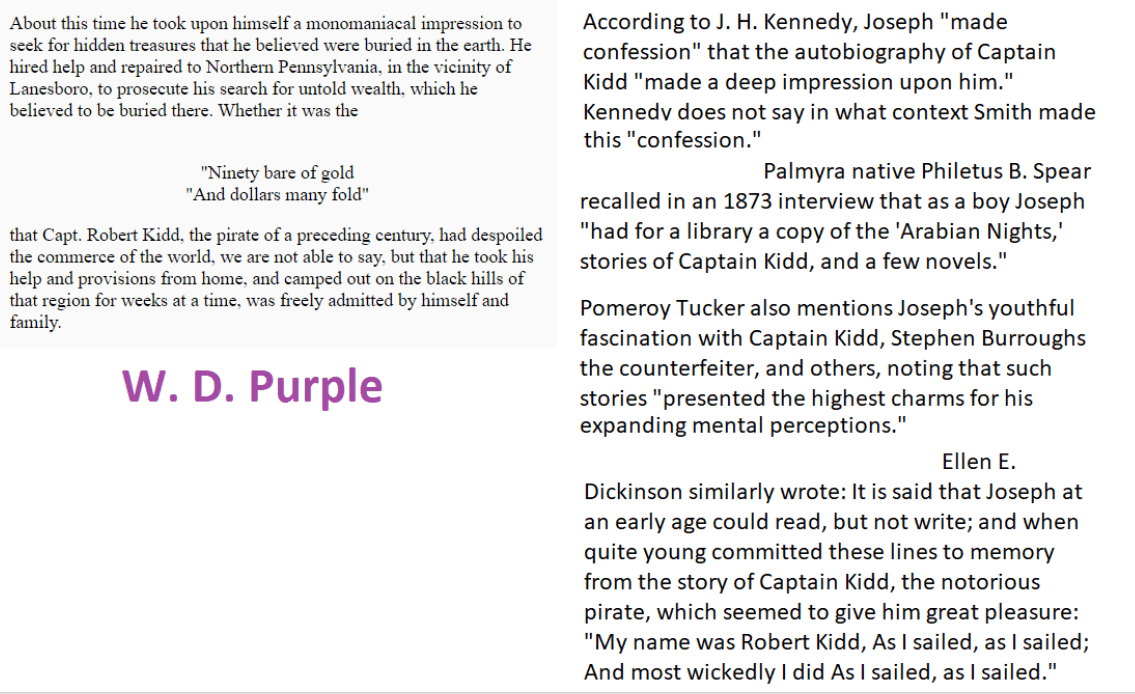 D.) The Proceedings themselves

E.) Joseph Smith claims he is in Bainbridge “spending a small time looking for mines but mostly working for Stowell on the farming and “Going to School”

F.) He mentions his seer stone and his seeing ability.

G.) Testimony of Others 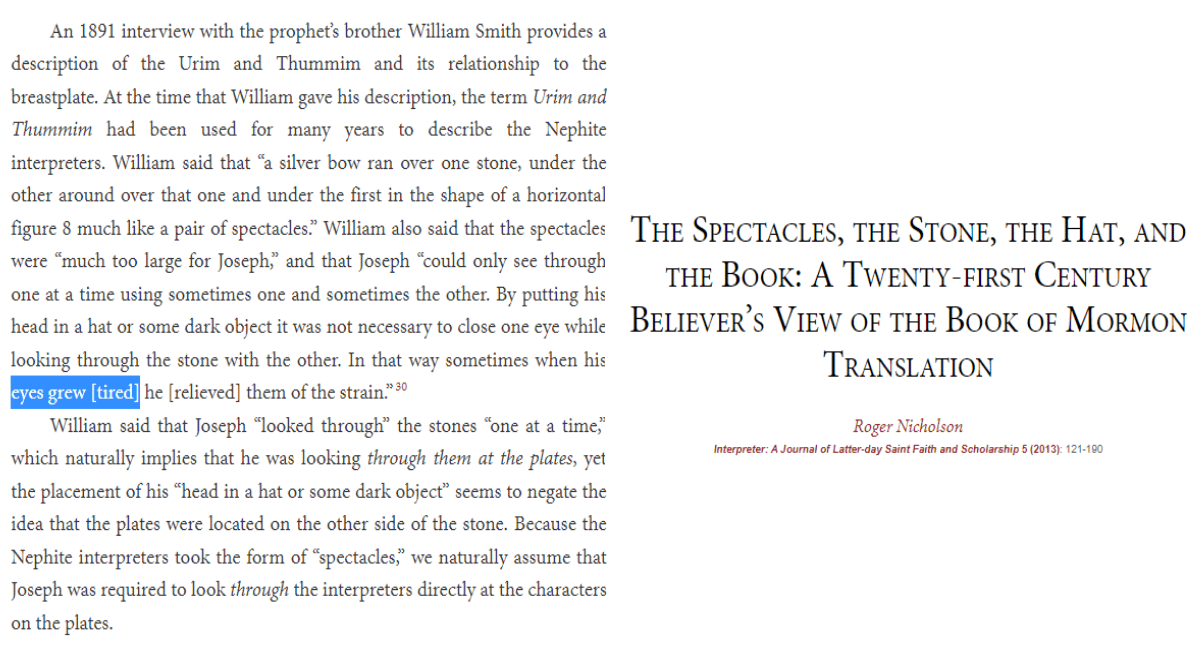 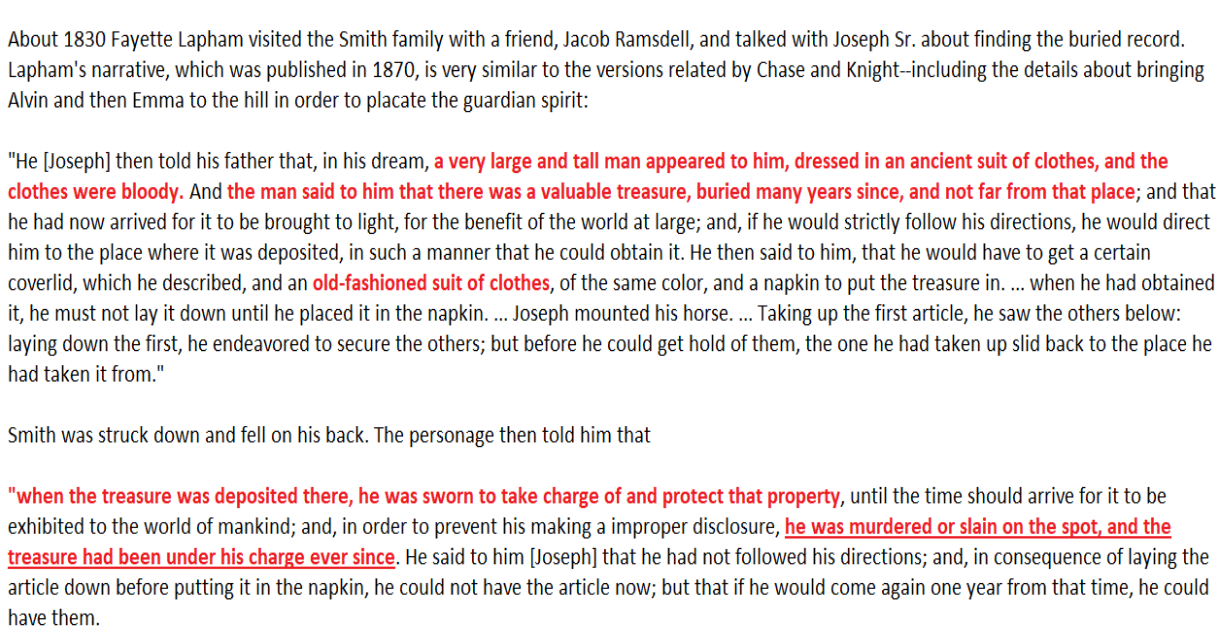 Court Charges: (Is this all in cents?)

TOTAL? $2.68 (verified by the docket commentary on such in next section)

IF THIS PROCEEDING IS TRUE, LDS APOLOGISTS STATE IT WOULD BE THE MOST DAMNING EVIDENCE AGAINST MORMONISM

The Mormon writer Francis W. Kirkham just could not allow himself to believe that the 1826 court record was authentic. He, in fact, felt that if the transcript were authentic it would disprove Mormonism:

“A careful study of all facts regarding this alleged confession of Joseph Smith in a court of law that he had used a seer stone to find hidden treasure for purposes of fraud, must come to the conclusion that no such record was ever made, and therefore, is not in existence…. had he [Joseph Smith] made this confession in a court of law as early as 1826, or four years before the Book of Mormon was printed, and this confession was in a court record, it would have been impossible for him to have organized the restored Church. (A New Witness For Christ In America, vol. 1, pages 385-387)

“If a court record could be identified, and if it contained a confession by Joseph Smith which revealed him to be a poor, ignorant, deluded, and superstitious person — unable himself to write a book of any consequence, and whose church could not endure because it attracted only similar persons of low mentality — if such a court record confession could be identified and proved, then it follows that his believers must deny his claimed divine guidance which led them to follow him…. How could he be a prophet of God, the leader of the Restored Church to these tens of thousands, if he had been the superstitious fraud which ‘the pages from a book’ declared he confessed to be?” (Ibid., p. 486-487)

The noted Mormon apologist Hugh Nibley published a book in which this statement appeared: “…if this court record is authentic it is the most damning evidence in existence against Joseph Smith.” (The Myth Makers, 1961, page 142) On the same page we read that such a court record would be “the most devastating blow to Smith ever delivered.” Because he could see the serious implications of the matter, Dr. Nibley tried in every way possible to destroy the idea that the court record was an authentic document. 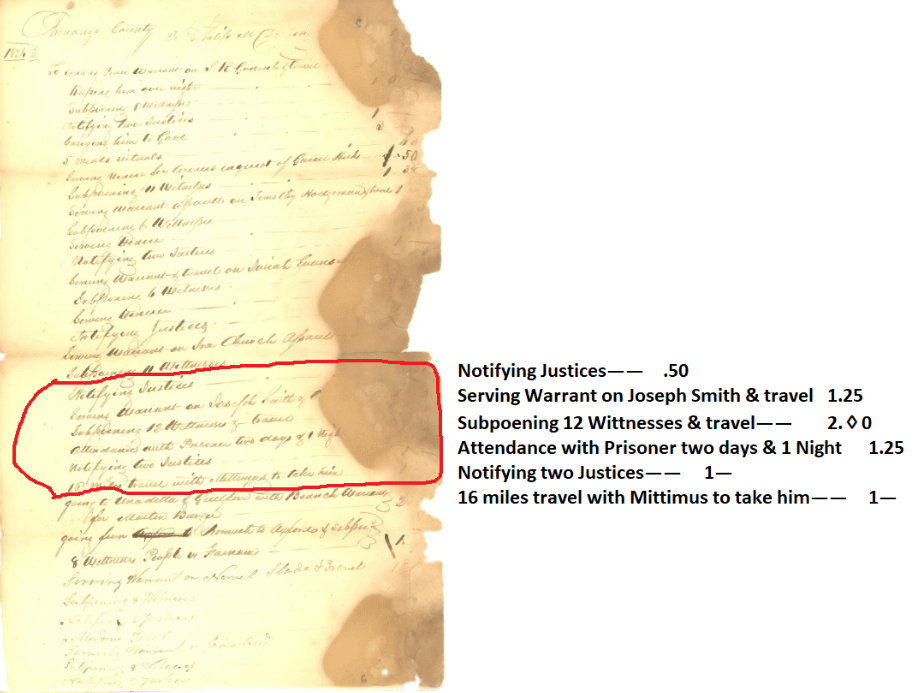 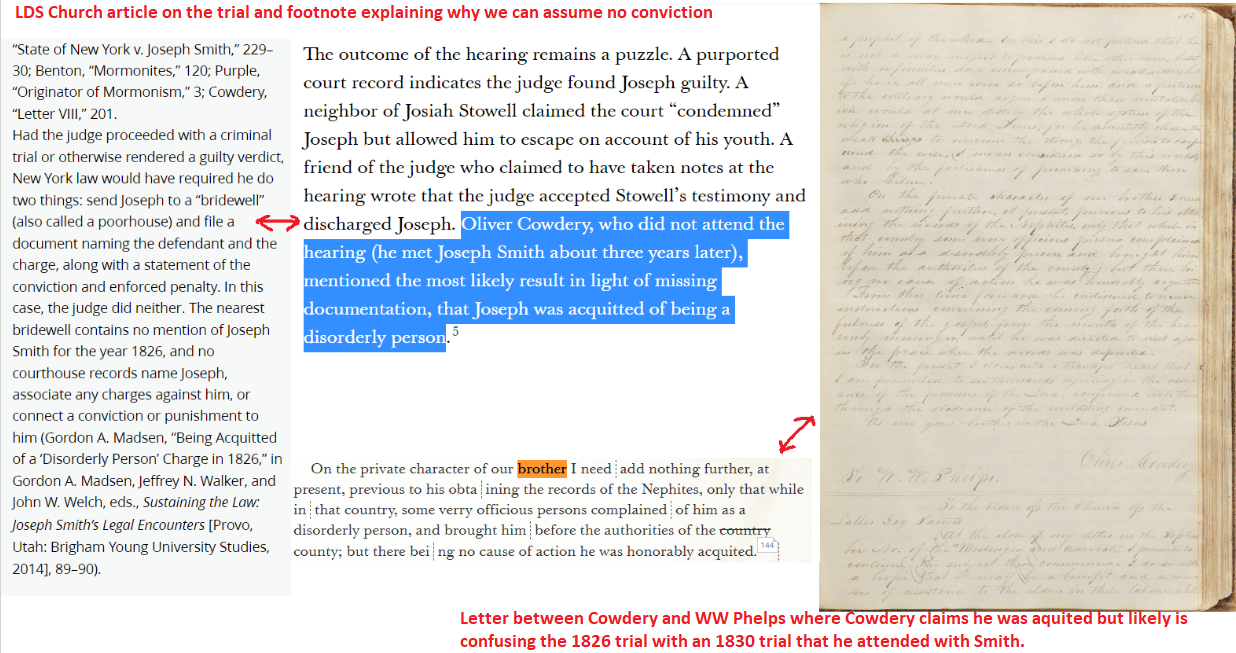 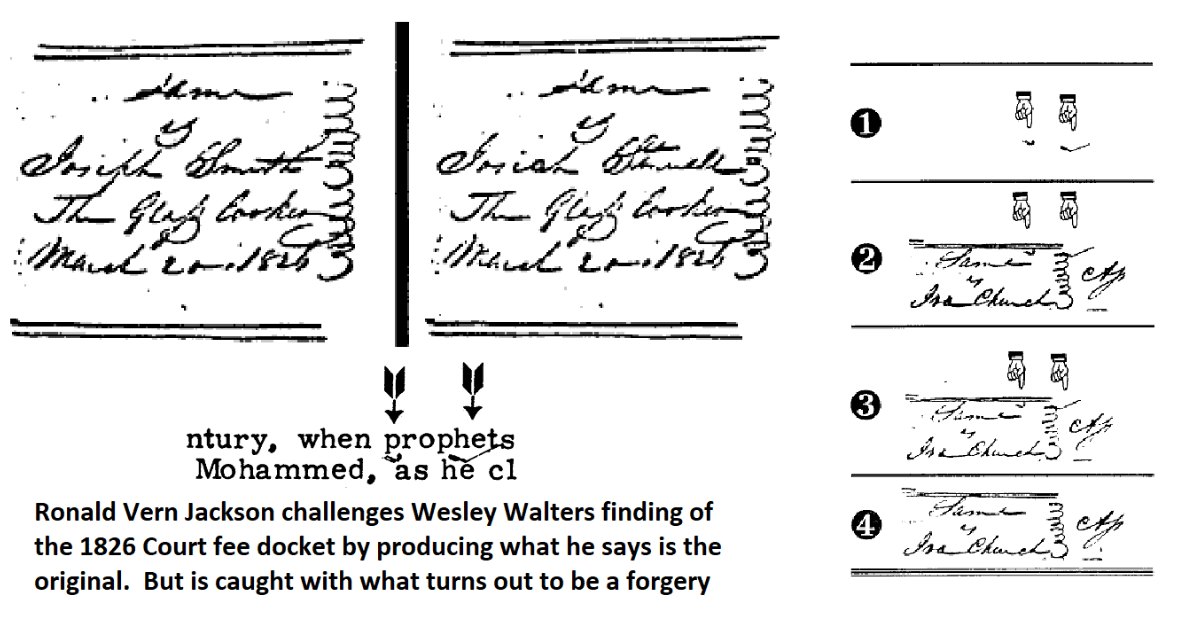 (feather but not the accompanying treasure, stolen items, bribing a person’s family to tell him where their loved one hid the thing